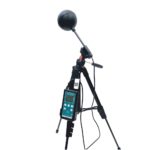 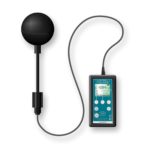 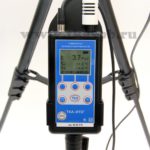 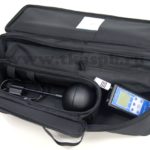 The principle of operation of the meter consists in converting the heat flux falling on the black ball into an electrical signal proportional to the density of this flux (irradiance), followed by scaling and indication of the measurement result.
The rise in temperature inside the black ball determines the response to external thermal radiation, proportional to the irradiation, averaged over the angle 4n (360 °) and exposure time, equivalent to the response of the human body to such environmental factors as radiation and convective heat transfer. This increase in temperature is measured by the induced infrared radiation from the inner surface of the black ball using a photodetector module located inside it.
The photodetector module contains a non-selective (in the wavelength range from 1.5 to 20 microns) radiation receiver, a temperature sensor of the module body and a circuit for compensating the ambient temperature. The data of the module are processed by the microcontroller, and the measured irradiance values ​​are displayed on the display of the electronic unit of the meter, as well as the temperature inside the black ball and the ambient temperature are indicated.

* Note: IV – the value of the measured quantity (irradiance)

Thermal exposure measurement is a process that can help calculate the temperature that is reached during radiation exposure and the degree of exposure to radiation. Specialized high-precision instruments for measuring thermal radiation can only be purchased in specialized stores, and our organization is one of such companies. “TKA-ITO” is a professional device that is capable of calculating and displaying irradiation indicators in the thermal spectrum in a short time. With a full 360-degree field of view and ultra-sensitive, extended-range sensors, results are calculated with the smallest error in the fastest workflow. Such a device is suitable both for measuring radiation exposure in a living space, and for research during the inspection of an industrial or scientific building. The price of the device for measuring thermal radiation includes verification with metrological standards, and the interval between verification is 24 months. Excellent build quality and attractive price are also important advantages that make this meter so popular in its class.

The device is designed to measure the density of the heat flux of radiation (or the intensity of thermal radiation, energy illumination, irradiation) in the infrared region of the spectrum, as well as to assess the exposure dose of thermal radiation of personnel in industrial and residential premises, due to the influence of local and general sources of heat.

Performance of work to ensure safe working conditions, sanitary and technical supervision in residential and industrial premises, certification of workplaces and other areas of activity regulated by the requirements of the Federal Law of the Russian Federation No. 426-n “On special assessment of working conditions”, SanPiN 2.2.4.548-96 , order of the Ministry of Social and Health Development of the Russian Federation No. 1034n, ISO – 7726: 1998, GOST 8.106-2001.